I’m Skeptical; Acupuncture to treat a horse with hives? 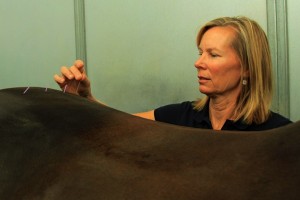 It was the Fall of 1999 and I had just returned from my first session of acupuncture training through the International Veterinary Acupuncture Society (IVAS) to learn how to treat animals with acupuncture.

I admit I was more than skeptical when I began this course but I was going to reserve judgement until I knew more. If I never tried using acupuncture on a horse how could I know if it was effective?

My first appointment for the day was a horse with hives. The horse had repeated bouts of hives and the owner was looking for an alternative to using steroids and antihistamines as a treatment. The medications helped but not for long.

When I arrived at the barn I had no difficulty finding my patient. He was covered with hives from head to toe. I had actually never seen such a bad case of hives! He looked like a quilted horse. It was so bad that the jugular groove, where an intravenous injection is commonly given, was indistinguishable due to the hives. 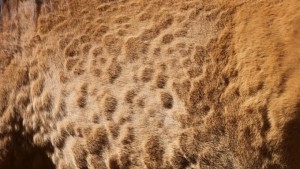 As I stood there looking at this horse with hives, who incidentally didn’t seem to care at all that he looked like a relief map, I decided it was time to try acupuncture. As many times as I’ve stuck hypodermic needles into horses for vaccines and medications, acupuncture needles were a new endeavor!

I began placing needles, trying to relate terms like “External Wind” to hives in horses. I wasn’t sure if my needle placement was exact but I knew I was close.

I then stood there for 20 minutes, not sure if the hives would disappear before my eyes. Of course they didn’t, but I would come back tomorrow and check on him.

I returned the next day to see the horse had his blanket on. I was surprised that there were almost no hives on his neck! With much angst I removed his blanket and found that the hives were 50-60% reduced. It is normal for hives to start regressing on their own within 24 hours if the horse is not exposed to the source of his hives. Maybe that was why he was better. (Still skeptical).

I treated the horse again, feeling slightly more confident about this treatment. Could acupuncture really help a horse with hives?

Day 3 arrived and the horse was hive free! No new hives but some scabbing from the old hives. I was pretty surprised but again I thought it might be just the natural progression of the hives regressing.

The owner arrived during the appointment and told me that the horse had tested positive to an alfalfa sensitivity. She was very diligent about not letting her horse have any alfalfa and had let all the neighbors know of his allergy. When I quizzed her further about his diet she told me that the supplement A & M was occasionally given to him. She did not realize that the A in A & M was alfalfa or she didn’t really relate it to alfalfa hay. He had been getting A & M during the time that I treated him.

That was my first revelation that there may be something to acupuncture. If I could help a horse with hives while he is continually being exposed to the allergen then there must be something to this alternative form of treatment. 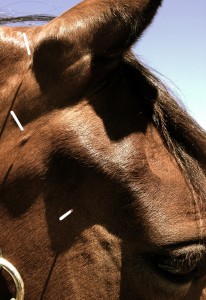 As I continued in my acupuncture course as a novice acupuncturist I had some excellent results using acupuncture. I treated 2 separate cases of headshaking. Both had the same symptoms, head shaking, but both had very different root causes.

One horse had an acute exposure to extreme weather conditions leading to External Wind Cold that caused excessive headshaking. It was an acute condition and it resolved with only 2 acupuncture treatments and it never returned.

The second horse was an extremely friendly, curious horse, but would get nervous and agitated if pressured (Fire Constitution). She was young and had a rider that pushed her very hard. It was too much for her, leading to Excess Fire and headshaking so severe that she was dangerous to ride. The same clinical presentation but again two very different causes. As this was a chronic case of head shaking, developed over several months, the treatment took much longer, 6-8 treatments over the course of several months.

From Hives in Horses to …

When I started out I wasn’t exactly sure what all the Chinese medicine patterns, like Excess Fire, were. What I did know was that I was getting some very good results from my acupuncture treatments.

In 15 years I’ve treated so many different conditions. From hives and headshaking to respiratory disease, behavior issues, nerve paralysis and many musculoskeletal problems. As a veterinary acupuncturist I use western medicine along with acupuncture to treat cases.

Many of my workdays are now spent keeping my performance horse patients in top condition for their work. From Olympic athletes to children’s sport horses, keeping them pain free and helping detect problems early on before becoming a serious injury is my goal.

I am no longer skeptical about the great benefits of acupuncture. I feel that I have helped so many horses with so many different issues and I am still amazed that I am constantly learning more about how acupuncture can be used.

And to think it all started for me with that horse with hives! Linda Rydgig, DVM, CVA

Tags:
Posted in: Acupuncture | Horse health
Previous: It’s time for our “Early Detection Wellness Panel”, with Fecal Egg Count!
Next: Smegma? Do I really need to know about this?