Smegma? Do I really need to know about this? 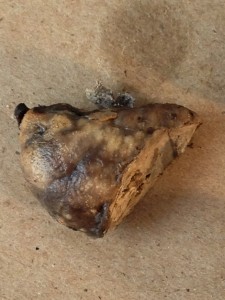 Smegma. A very funny sounding word, and many of you have probably never even heard of this word, unless you have a male horse. But, it’s a new year and it’s always good to learn something new!

According to Wikipedia: Smegma (Greek smēgma, “soap”) is a combination of shed skin cells, skin oils and moisture. It occurs in both female and male mammalian genitalia.

It sounds a bit disgusting but remember it occurs in female and male mammals, as in horses and humans! Yes you too may have smegma. What we are talking about here though is the flaky, sometimes stinky stuff you find on your male horse (and occasionally your mare).

Where is Smegma found? 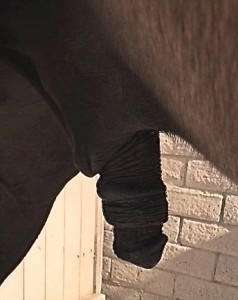 A male horse has a sheath that is a double fold of skin that covers the penis when it is drawn up inside the body. A sheath can and will get dirty and often a little stinky. The sheath has sebaceous glands that secrete sebum. When sebum mixes with dirt and sloughing skin cells it makes smegma. It is usually gray or tan, sometimes black, and becomes a soft, waxy substance. On the penis itself you may see hard dry flakes of smegma. 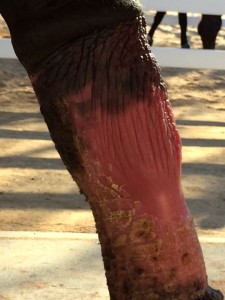 If the smegma and dirt are allowed to build up too much it may irritate the sheath and penis but ideally the smegma is more of a lubricant and protectant of the penis. When a horse has a large swollen sheath the first thing we do is check to see if the sheath is excessively dirty or if there are habronema lesions (habronema fly larvae can cause an inflammatory immune response).

If  your horse’s sheath is exceptionally dirty, periodically the smegma can mix with more dirt, sweat and mineral salts from the urine and form “beans”. A bean looks and feels like a piece of hard gray bubble gum. Beans accumulate in the urethral fossa (this is the opening on the free end of the penis).

If the bean gets too large it can be irritating and possibly lead to infection. If you feel a firm mass at the end of the penis it is likely a bean and needs to be manually removed. It will only get bigger so you might as well deal with it sooner rather than later. 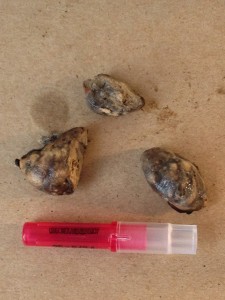 Sometimes you notice that when they urinate the stream goes sideways or just dribbles. This is another indication of a possible bean. Often the force of the urine stream will dislodge the bean but sometimes it won’t.

What do I do about the Smegma?

You have two choices on dealing with smegma. One, you call your veterinarian to clean the sheath, or two, you roll up your sleeves, put on some gloves, get some very gentle soap and your bucket of cotton and water and clean it yourself. Remember though, if your horse does have a bean it may be uncomfortable and he may require sedation to remove it. That is when you will need to call your veterinarian. A third choice available is to do nothing. Many horses are fine with never having their sheath cleaned but you should monitor it and be aware of when there may be a problem.

Happy 2016! Now you know what smegma is and what you can do about it. The good news is that we’ve never had a horse with a serious problem from a dirty sheath, but a dirty sheath attracts more flies which can cause summer sores (habronemiasis). Summer sores are a difficult and time consuming condition to treat.  Also make sure you aren’t missing more serious problems such as infection, lacerations or tumors. Have your veterinarian check the sheath when they do routine vaccinations once or twice a year and pay attention when your horse drops his penis to urinate. You will be able look for any abnormalities at this time.

If nothing else, you have a new word to share at lunch or cocktail parties!